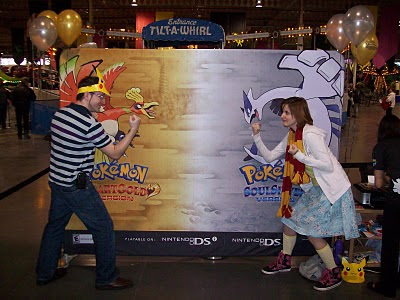 A decade ago, Pokémon Gold and Silver were released as the second pair of games in the wildly popular series published by Nintendo. As the only generation that was still incompatible with the DS through either Pal Park (GBA slot) or Wi-Fi connection, the decision to remake Gold and Silver as HeartGold and SoulSilver shouldn't come as a surprise. Additionally, all four generations have had at least one revamp released soon after the original pair, often combining elements exclusive to either so that late adopters don't have to struggle to trade for their favourite Pokémon.

The gameplay of Pokémon is quite impressive for having remained largely unchanged for nearly 15 years. Instead of altering a formula that has proven successful, each successive entry to the series has simply added “side” elements that keep players entertained when they're tired of waiting for Magikarp to evolve into Gyarados. In this case, it's the Pokéwalker peripheral that makes HeartGold/SoulSilver absolutely essential. Yes, the Pokéwalker is just a step counter that lets you display your favourite Pokémon in glorious black and white. However, you can also catch rare Pokémon that might not be in your version of the game and obtain items through a mini-game. You can also “connect” with other people's Pokéwalkers, which makes for a great conversation opener with strangers.

While the level gains are small and the items might not be amazing, it's nice to know that you're still “playing” the game even when you're busy with your day to day life. Plus, it's just awesome to have your Pokémon constantly by your side in the real world.

Another addition to these remakes is the Pokéathlon, which – like the Beauty Contests before it – adds another set of stats to each Pokémon. The stylus-based mini-games in the Pokéathlon are decidedly more entertaining than Beauty Contests, and they can be a great diversion for when you're tired of getting your butt handed to you by Red yet again. 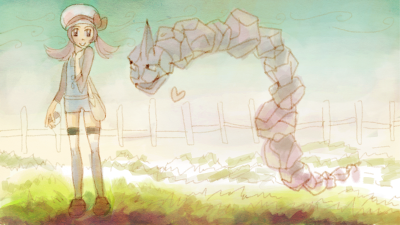 Alice's cute Pokémon artwork
Graphically, the game uses the Diamond/Pearl/Platinum engine, but adds a new “following” sprite for every single Pokémon – that's right, the first Pokémon in your party follows you just like Pikachu did in Yellow! And, complying to the standards of the last few generations, you can now choose to be a boy trainer or a girl trainer. These improvements might seem insignificant to the casual observer, but for anyone who's fallen in love with the Pokémon world, they're pretty awesome.

Overall, the quality of the music tends to be hit or miss. The battle melody gets tedious after a very short time, but since it is a portable game, the sound will probably be off if you're playing in public anyways. It's charming that each Pokémon's cry is still an 8-bit screech, reminding you that even if the game looks more realistic and polished, Pokémon are still “virtual” pocket-monsters. There is also a key item that unlocks a chiptune soundtrack - a mix of old tracks and new mixes - which I personally prefer to the “standard” soundtrack.

All in all, HeartGold/SoulSilver is a great starting point for any new trainer beginning their first Pokémon journey – and naturally, a fantastic trip down memory lane for every 20-year-old blogger who hasn't played this since she was a kid. While adult gamers might be put off by the fact that Pokémon has never quite “grown up”, being eternally favoured by the elementary school demographic (yes, Pokémon still don't “die”, they “faint”), there's no shame in delighting in this cute and complex RPG. There is enough deep strategy involved in the game to make it appeal to any age of gamer, although you are never forced to go any deeper into the mechanics than you want to. All in all, this is a great game to fill in the wait between Diamond/Pearl/Platinum and the next generation of Pokémon, Black/White. With the addition of the Pokéwalker accessory, this game is a must-buy.