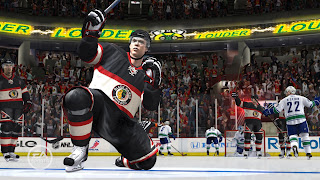 EA Sports has unveiled the cover athlete for the upcoming game in their NHL Franchise: Jonathon Toews. Toews has had a monster year, winning a gold medal and tournament MVP at the Olympics, and also nabbing a Stanley Cup and Conn Smythe Trophy as most valuable player in the playoffs. Toews joined Top NHL prospect Tyler Seguin to announce the arrival of EA Sports NHL 11, expected to be released this September. Despite having their beloved Vancouver Canucks eliminated from the playoffs two years in a row at the hands of the Chicago Blackhawks, the development team at EA Vancouver has once again selected a Blackhawk for the cover. “I told Jonathon the first day I saw him that he had ousted my team two years in a row” said Sean Ramjagsingh, producer of the game. “Choosing him was still a no-brainer though.”

The game boasts an all new faceoff engine, full Canadian Hockey League rosters, and has added broken sticks - apparently the most requested feature from fans. If your player breaks his stick in the game, you will need to either get one from another player on the ice, or go to the bench to grab a new one. It also features a brand-new physics engine, which alleviates the use of canned animations, giving the game a more realistic feel. “We were at E3 and we saw about 25 different things in the demo that we had never seen before” said Brent Nielsen, the Executive Producer of NHL 11, on the topic of the organic nature of the new engine.

The franchise is also celebrating its 20th year developing hockey games. I asked Brent about whether the team had channelled any of the mid 90’s hockey games while reworking its franchise. “Absolutely. I grew up on the old NHL games. We looked at those and tried to figure out what made them so great. We also had to ask what we were capable of doing with the hardware.” The franchise went through a major overhaul when they released NHL 07; it introduced a new shot stick feature which used the right analog stick on the controller to shoot the puck. The move worked out nicely for them, as they have received immense critical acclaim, and 22 Sports Game of the Year awards. “We are so competitive that we are not allowed to just rest on our laurels, and that’s why we reinvented the game in the first place.” Said Nielsen. “We aren’t just competing with the 2K hockey series, we are competing with Madden, FIFA, and every other sports game on the market. We want to be the best sports game period.” There were no mentions of any special features for the 20th anniversary of the game, but it’s likely that some announcements will be made in the months leading up to the release. 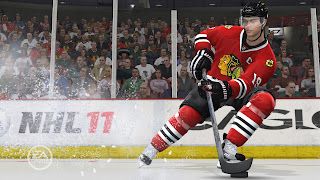 During the playthrough, Paul Hunter and I both agreed that the game feels more organic and accurate than its predecessors, and that the physics are hugely improved upon. You can no longer simply skate around the ice like Bobby Orr on a power play; you actually need to move the puck well and play intelligently. It's slower and feels well-paced. According to Ramjagsingh, “It’s a game that we wanted to be accurate and challenging for hockey fans, but also one that is fun and accessible for people looking to get into the series. We have met so many people who got into hockey in the first place because of games like NHL 94, and I think we’ve done a good job of balancing the game.”

Last year’s iteration of the game was really strong: it felt like they had taken the foundation they'd built and really refined it. It’s tough when a game hits that point because it can be difficult to move beyond that – but with the new physics engine and overall obsessive attention to detail, the guys at EA Sports Vancouver might just once again reign supreme atop the sports game food chain.
NextGen Player Preview Sports