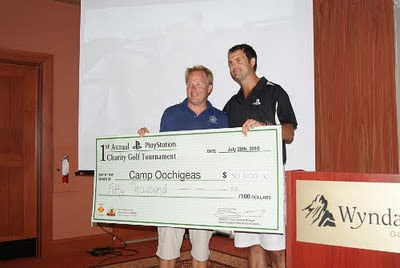 Sony Computer Entertainment Canada (SCEC) held their first annual PlayStation Charity Golf Tournament this past Wednesday, raising $50,000 for children with cancer. More than 130 golfers teed-off at the scenic Wyndance Golf Club located in Uxbridge, Ontario, for the charitable event benefiting Camp Oochigeas. Founded in 1983, Camp Oochigeas gives children united by the common bond of cancer the opportunity to participate in year-round programs at their site in Muskoka, at the Hospital for Sick Children and in the community.


“PlayStation Canada’s association with Camp Oochigeas reflects our strong commitment to the community,” says Stephen Turvey, General Manager of SCEC. “The generosity of all those involved mirrors the spirit of Camp Oochigeas, and we thank everyone who has helped kick off our first charity golf tournament.”

The private golfing event for SCEC vendors offered four levels of sponsor ranging from $2000 - $3000, with each level offering one complimentary round of golf for four. The Wyndance Golf Club holds the distinction of being the only course in Canada designed by the legendary Australian-born pro golfer Greg Norman. Norman, a member of the World Golf Hall of Fame, has made a huge impact on the sport of golf, having spent 331 weeks as the world's top ranked golfer in the 1980s and 1990s, and later designing more than 70 golf courses on six continents. With its carefully crafted route through and around a former sand and gravel pit, Wyndance is considered by many to be one of Norman's most breathtaking. In 2008 the golf course was named runner-up by Golf Digest as best new course in Canada. 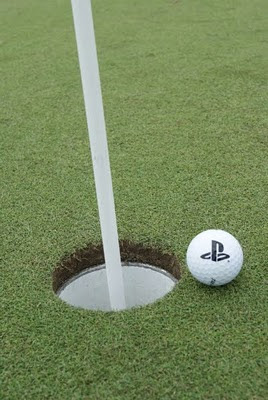 Camp Oochigeas is a privately funded, volunteer based organization that aims to enrich the lives of kids affected by childhood cancer by providing campers with a variety of opportunities for personal and physical growth. Some of the activities children can participate at Camp Oochigeas include swimming, arts and crafts, canoeing, and wakeboarding. The funds raised from the PlayStation golf tournament supports the camps year-round programs that approximately 680 children attend cost-free.

“PlayStation has been an incredible supporter of Camp Oochigeas over the past few years, and we are amazed at the success of the first PlayStation Canada Charity Golf Tournament,” said Rob Drynan, Executive Director, Camp Oochigeas. “Thanks to the hard work and commitment of the PlayStation team, more kids will be able to experience the magic of Camp Ooch!”

To expand their operations, Camp Oochigeas announced in June that the organization has found a home in Toronto after an exhaustive three year search. Their location needs were very specific including being close to SickKids Hospitial, have a "campy" look and feel, and will allow them to deliver new programs not possible at the hospital. The new location, near Bathurst and College Streets, will be opening its doors this fall.