A Glimpse of Nintendo's Epic Lineup

A while ago, I got some hands-on time with a few of Nintendo's upcoming games for the fall and holiday season. 2010 is without a doubt the year of the retro franchise revival – about half the games that Nintendo has announced are new entries in long-thought-dead series. Donkey Kong Country? Check. Tron? Check! Kid Icarus? ...Well, we'll have to wait a little longer for that one. 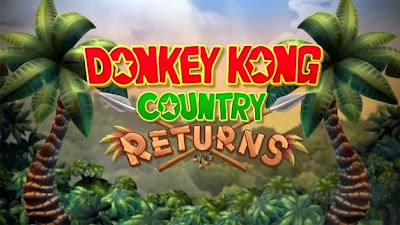 Let's start off with the biggest deal (for me): Donkey Kong Country Returns. When I first heard the announcement at E3, I almost had a heart attack. This is an all-new, side-scrolling platformer – without bongos. The game looks great and sounds great; a lot of the background music is remixed from the original games. While everything is a little too shiny, the game plays fantastically well with level design that offers a good mix of innovation and nostalgia. There is only one thing that I really dislike about this game, and that's the controls. Not only are you forced to use the Wii Remote in either horizontal or nunchuck configuration, but some very important moves require the use of “fun” motion controls. I don't know about other gamers, but when I'm careening off the edge of a cliff and jumping at the last minute to get that extra boost, I'd rather trust the push of a button than a frantic controller-shake. Similar to my issue with other “hardcore” games that use “casual” controls (like Super Mario Galaxy), I don't like dying because the controls are bad; I like dying because I messed up. This may all sound like a negative impression, but I don't mean it to be – I'm looking forward to this more than any other title coming out this year! It's just that with a game that's amazing in so many ways, the negative aspects need criticizing too. Release date: November 21, 2010

The original GoldenEye was one of the greatest games to be made for the N64. It's the great-grandaddy of modern console shooters, and it's still held in high regards by many fans of the genre. The news of its remake wasn't surprising, per se – it's just surprising that it's a good remake. GoldenEye Wii doesn't mess with the original formula – it just adds a few modern touches, like destructible terrain and a modern Bond story. And that's perfectly fine; it's how a remake should be (but rarely is). As an added bonus, you can use just about any controller configuration you want, whether it's the original Gamecube controller, the Classic, or the Wii Remote. This really should be a standard option in every game that isn't super-casual, but until that happens, I'll try to shut up about it and just appreciate the effort. Release date: November 2, 2010 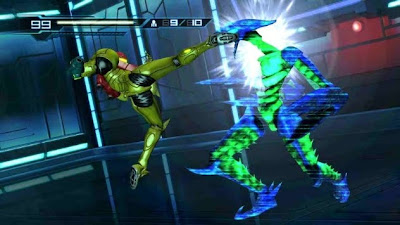 Metroid: Other M is one of the biggest titles of the year. The game's being promoted as the first that really gives you an idea of what's going on in Samus's head, and that's already a pretty interesting. Most of the game is played with a horizontal Wii Remote from a 3rd person perspective similar to the old-school 2d games. Easier, almost, because there's a strong auto-aim on your Beam. But, there's a twist – you can (and must) switch to 1st person by pointing the Wii Remote at the screen. You'll switch between the two quite often as that's the only way of shooting missiles, though you can't actually move around in first person. The switch may be seamless, but in practice, shoot-and-run situations might be harder to pull off. On a side note, melee combat has finally been added to the franchise; you can counterattack and perform context-sensitive attacks on the various enemies. Release Date: August 31, 2010

PokéPark: Pikachu's Big Adventure is a cute and very casually paced game. While it looks a bit simple and child-oriented, it's still fun to roam around and befriend other Pokémon. The mini-quests in the game are entertaining if a bit gentle and simple, but bang-on for the target audience. If you have little tykes of your own, this might be a great introduction to the gaming world. Release date: November 1, 2010 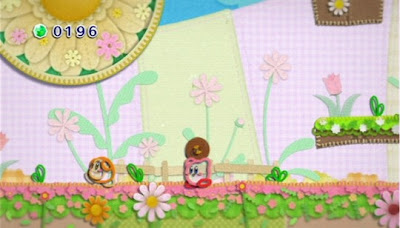 Kirby's Epic Yarn is going to be another heavy hitter this year, with the most innovative visual design I've seen in a long time. The look of this game invokes the mood of games like Yoshi's Island with its crayon effect, or Okami's sumi-painting style – except in this story, everything appears to have been made out of the bits and pieces found in your grandma's knitting drawer. Characters and enemies are made of yarn, and they “unravel” when defeated. There are precious buttons and pieces of patchwork felt a-plenty. Essentially, everything is just really, really cute. The game really plays with the 2-dimensionality of a yarn world by adding sections where you move behind and in front of terrain. And thankfully, despite the cuteness, it feels like a fairly intense platformer – more Super Mario Bros. than, say, Super Princess Peach. Release date: October 17, 2010 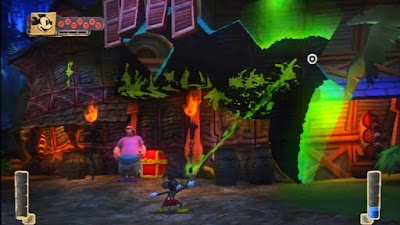 On the topic of epic games, Epic Mickey will also be coming out this year. From the demo I played, I discovered that a major game mechanic is Mickey's new ability to destroy and rebuild objects and terrain with the help of magical paint. While it isn't as visually impressive as one might hope for (I've seen PS1 games that looked better), the concept is quite surprising, to say the least. In the Disney universe of happy-ever-afters, there is a world populated by cast-offs; characters who have fallen to the wayside over the course of time. A surprisingly profound concept for the normally whimsical and happy-go-lucky brand, isn't it? It feels a bit like what Kingdom Hearts would've been without all the cool Square-Enix characters. Come to think of it, the game does bear a few similarities to Kingdom Hearts – the two even share a Steamboat Willie stage! Release date: Holiday 2010

Wii Party feels a little too much like the newer Mario Party games to be really original, but it's still a pretty solid family game. Because there's a high degree of luck involved, age and skill have very little to do with how well you fare, so your kids won't kick your butt every time you play. Plus, like the rest of the Wii series, you get to use your Miis. Thank goodness, eh? All those hours you put into making Grandma, Grandpa, Mario, and Jesus are finally paying off. Release date: October 3, 2010 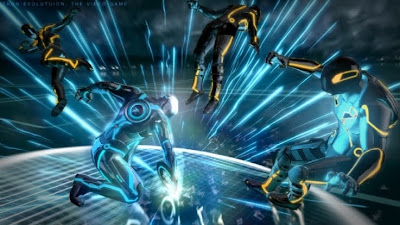 Tron: Evolution is a curious mix of RPG, action and racing. I only tried out the racing portions myself; they play well and look fabulously cyber-shiny. This game manages to keep the feel of the original movie but vastly improves on the graphics. Actually, the look is a bit similar to the Tron world in Kingdom Hearts and – I really need to stop talking about Kingdom Hearts. I didn't spend enough time roaming around Evolution to really get a feel for it, but it seems like a good tie-in for the upcoming movie. Lately, tie-in games seem to have been getting better than usual – some, like Scott Pilgrim VS. The World, are arguably better than the movie itself – so I'm not at all apprehensive about the quality of the rest of the game. The events of Tron: Evolution take place between the original 1982 Tron and the upcoming Tron: Legacy. The release date is November 1, 2010, which means that you'll have about a month and a half to beat the game before the movie comes out.

In addition to these killer Wii games, there are also some must-have DS titles coming out soon. Dragon Quest IX has already been released but still deserves special mention, as it goes above and beyond the duty of a regular JRPG and contains tons of extra content that can be unlocked at IRL events (and yes, they have been held in Canada too, not just in Japan). You can even just get treasure maps by simply hanging out with other people who have set their game on “tag mode”. A hand-held mini-MMO game that you can play while hanging out with friends – is this the current-gen answer to Crystal Chronicles for the GameCube?

While I also tried out half a dozen upcoming Disney-centric DS titles, I have a feeling that I'm getting too old to really appreciate them. I'm sure they will be loved by fans of the original shows, but they just don't have that broad appeal that can be appreciated by all gamers. The Camp Rock rhythm game was probably one of the more interesting titles in the collection of casual titles, but it doesn't offer anything new or interesting. That's a pretty serious problem when you consider the saturation of today's rhythm game market.

Professor Layton and the Unwound Future, the third entry in the puzzlicious series, keeps the delightfully classy and light mood of its predecessors. It's everything you'd expect it to be: a solid collection of puzzles with more of the intriguing backstory that keeps the games addictive and catchy. Will this answer questions like “What is Luke's relation to Layton?” or “Do true gentlemen really prefer blondes?” Probably not. But I'm still going to enjoy the hell out of it. Release date: September 12, 2010 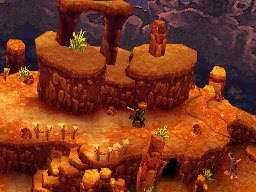 I never played the original Golden Sun (I know, I bring shame to the name of JRPG fangirl), but it's apparently the only traditional JRPG that my boyfriend has ever enjoyed. From this perhaps arbitrary recommendation (as well as its consistent ranking as one of the top games of all time), I was excited to see what Golden Sun: Dark Dawn had to offer (besides a cheesy title). The world of Golden Sun looks amazing– the in-game graphics push quite a lot out of the DS's graphic capabilities. The summons, magic, and enemies are innovative and beautifully rendered. Since the game takes place 30 years after the previous title, the characters are new, though related to the previous generation of heroes. Overall, the gameplay seems quite typical for the genre, but that's quite acceptable – there's a reason why the classic formula is a classic. Release date: Holiday 2010

I think that about sums up the best of what's to come! The Nintendo star is shining brightly this year; instead of pushing to revolutionize home gaming with 3D, they're sticking to solid titles on the Wii and leaving the experimental business to the upcoming 3DS. Not a bad choice, considering the success they had with their previous 3D console. 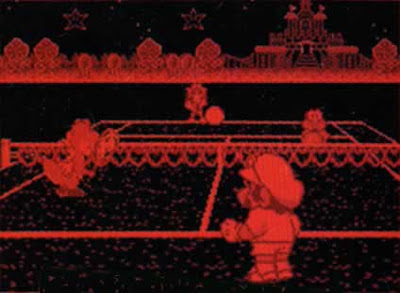 This is what the future looked like in 1995.
NextGen Player Preview Nintendo DS Wii