Eight Friends Are Invited To The Resident Evil: The Mercenaries 3D Character Trailer 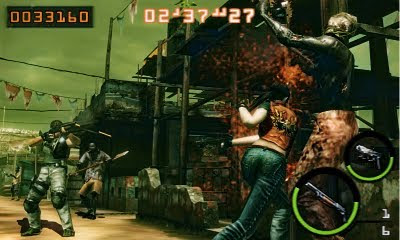 Well okay, not every character in Capcom's upcoming Resident Evil: The Mercenaries 3D are friends per se, but it is nice to see them all working together to rid the land of those nasty bio-organic weapons (B.O.W.). The game marks the debut of the Resident Evil series on Nintendo's new 3DS console, and is a console exclusive. The Mercenaries 3D has an expected release date of June 28, 2011.


In the latest trailer, Capcom reveals the eight playable characters that are banding together in a battle against the clock to rack up as many points as possible obtained by blasting the horde of Las Plagas infected creatures. An unlockable mode first introduced in Resident Evil 4, each mission of The Mercenaries takes place on a fixed map as has players face off against never ending waves of flesh eating zombies in frantic pace as the clock slowly ticks down to zero.

As seen in the character trailer below, the game features brother and sister Chris and Claire Redfield, STARS agents Jill Valentine, Barry Burton and Rebecca Chambers, the masked HUNK, the hired mercenary Jack Krauser, and the man in black, Albert Wesker.

Check out the trailer here:

Featuring re-mastered stages from Resident Evil 4 and Resident Evil 5, the game will be a trip down memory lane for veteran fans, but there's plenty new to keep the experience fresh. While the gameplay will be familiar to those who have played the previous Mercenaries, the biggest change is the presentation is full 3D, taking advantage of the Nintendo 3DS' unique capabilities.

For the longest time (well, at least since 2005's Resident Evil 4) fan have been demanding the ability to run and shoot, and finally this feature has been included in The Mercenaries. That in itself is a huge gameplay change and should serve to make the action even faster and more action-packed than ever before. An additional gameplay change includes the ability to switch weapons on the fly using the Nintendo 3DS touch screen, further enhancing the speed and mobility of your characters. 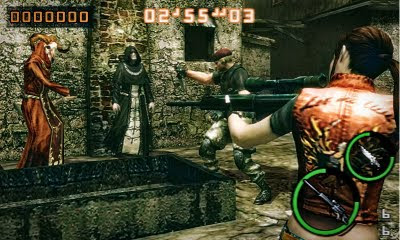 The game can be played as a solo experience or you can team up with gamers across the world and enjoy two-player action via ad hoc and Nintendo WiFi network play. In total there are over 30 mission of intense Mercenaries action where you do battle with terrifying enemies, including the deadly Executioner and Popo Karimu﻿.

Resident Evil: The Mercenaries 3D﻿ includes a brand new Skill Slot feature which lets players fill three skill slots from a selection of 30 skills including improved weapon performance, reload speed or melee abilities, allowing for complete customizations of characters to suit your style of play. There is also a robust skill and abilities unlock system the rewards players for achieving milestones. Skills and abilities that become available include added health, weapons damage, customization and so on.

As an added bonus, The Mercenaries 3D will also include a playable demo of Capcom's forthcoming Nintendo 3DS title, Resident Evil Revelations.﻿ In the game players once again assume the role of Jill Valentine as she experiences the horrors of this all new Resident Evil title.

Resident Evil: The Mercenaries 3D ships on June 28, 2011 and is rated M for Mature by the ESRB.
Nintendo 3DS Survival Horror Video