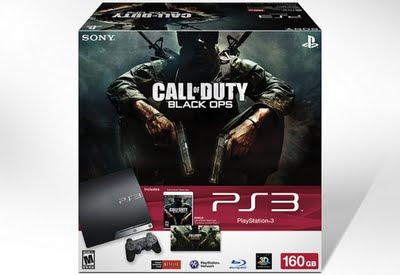 April showers bring May...limited edition PS3 Call of Duty: Black Ops bundles. Well, I don't remember the saying going quite like that, but since we're used to seeking shelter during these past weeks of inclement weather perhaps it's time to consider extending our indoor living just a wee bit longer with this upcoming exclusive new PS3 hardware bundle.


On May 31, Sony Computer Entertainment America and Activision Publishing are coming together to release a new bundle in North America which just happens to include the best-selling game from last year. The full contents of the bundle are a 160GB PS3 system, a Dualshock 3 wireless controller, a copy of Call of Duty: Black Ops on Blu-ray disc, plus Call of Duty: Black Ops First Strike Content Pack, all for $299.99 ﻿(a $360 value).

If you're thinking of picking up your first PS3 it's worth noting that system has many features included out-of-the-box such as HDMI connectivity, 2 USB ports, built-in WiFi, free access to the PlayStation network (Sony's robust online service used for digital downloads, online multiplayer gameplay, friend list and chat), stereoscopic 3D gameplay (with compatible TV sets), and services such as Qriocity and Netflix.

Call of Duty: Black Ops has sold a ridiculous amount of copies to date, with over 13.7 million copies in the US alone as of February, 2011. In fact Black Ops has now become the best-selling video game in US history, even topping Nintendo's Wii Play, the former leader in total sales. During the opening week, Black Ops pushed 5.6 million units in North America and the United Kingdom, making it the largest entertainment launch in history. From a revenue perspective, Black Ops took in $360 in its first 24 hours on sale, and $650 million in its first week. By the third week of December last year, Black Ops passed the $1 billion dollars in revenue. That's a lot of green in only six week's time.

“The choice to bundle Call of Duty: Black Ops and the First Strike Content Pack with the PlayStation 3 is perfect for anyone looking to bring home an incredible entertainment experience, that delivers endless hours of excitement through the games epic single player campaign, hugely popular multiplayer on PlayStation Network, or our fan favorite co-op Zombies mode,” said Mark Lamia, Studio Head of Treyarch. “And for those with 3D enabled televisions, the game’s Campaign, Multiplayer and Zombies experiences are seamlessly set up for stereoscopic 3D on the PS3 right out of the box.” ﻿

The First Strike Content Pack includes four additional maps called "Berlin Wall", "Discovery", "Kowloon" and "Stadium" and brand new Zombie mode using a map called "Ascension" which takes place in a Soviet launch site﻿﻿ and enables up to four players to use a range of weapons to blast an endless wave of blood-thirty zombies.

A second map pack (not included in the limited edition bundle) entitled "Escalation" was released on Xbox Live on May 3 and expected to be a timed exclusive. No details have been given as to when the PS3 version of Escalation will be released.
Bundle Exclusive FPS PS3