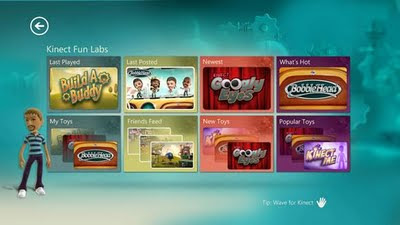 
Among the Kinect announcements was news that a brand new hub on the Xbox 360 dashboard, called Kinect Fun Labs, was downloadable through Xbox Live starting today. The new area (seen above) showcases numerous new apps that utilize the Kinect sensor and are available for download. These apps (called Gadgets) enable players to perform actions such as scanning their body to create realistic avatars or funny-looking boobleheads.

Kinect Fun Labs will launch with four Gadgets, including:

Kinect Me -- scans your body and clothes and creates an Xbox Avatar in your image.
Bobble Head -- scans your face and body to create a replica bobblehead figure that you can manipulate with waves of your hand.
Build A Buddy -- scans an object you place in front of the sensor and creates a silly creature onscreen resembling the scanned object
Kinect Googly Eyes -- scan in real-world objects and give them googly eyes, then use your hands to manipulate the googly-eyed creature.﻿

Microsoft says Kinect Fun Labs will be updated regularly and has already promised more experiences will begin arriving in July, including Avatar Kinect (wait, isn't this already out?) and Kinect Sparkler (a Gadget that lets players draw on pictures with sparklers).

It appears Microsoft will be hosting "elections" to determine the next Kinect Fun Labs Gadgets to produce, as on the official website an election, which ends July 6th, is already underway. Gadgets that can be voted upon include Virtual Conductor, Keyboard Anywhere, Kinect Body Art, Hand Puppets, Digitial Pin Art, and Music Visualizer.

Released in late 2010, Kinect for Xbox 360 has been recognized by Guinness World Records as the fastest selling consumer electronics device ever, having sold 8 million units in its first 60 days on sale. That's faster than Nintendo's Wii, Sony's PlayStation Move, and even more than Apple's iPad and iPhone.

Microsoft also announced a slew of games that will be releasing soon that will feature Kinect compatibility. These games range from Forza 4, which uses the Kinect sensor to track player's head movements, to Dance Central 2 (now featuring two player simultaneous battles), Fable: The Journey which lets players cast magic with hand movements, Kinect Star Wars for those who have always wanted to mimic dueling with a lightsaber, and Kinect Disneyland Adventures which puts the entire Disneyland experience on a disc. There were even some nice surprises such as Minecraft coming this winter to Xbox 360 with full Kinect compatibility, and a new cinematic action game called Ryse in development by Crytek (the studio behind Crysis 2).

Molly O’Donnell, Xbox 360 director of marketing integration, says the company will “have the best games for everyone, including the biggest blockbusters, and the next generation of games and experiences that explore the full magic of Kinect.”﻿

In addition to Kinect Fun Labs and games, Microsoft is also expanding Kinect's capabilities by introducing voice search with Bing on Xbox 360. Using voice commands, users can search Netflix, Hulu Plus and ESPN, as well as the Xbox LIVE Marketplace to find the entertainment they are looking for. Furthermore, the company has also stated that users will soon be able to control YouTube videos by using their voice alone.

“This is an incredible time of growth and innovation for our business leveraging technologies that see us, hear us and connect us all together,” said Don Mattrick, president of the Interactive Entertainment Business at Microsoft. “This year by bringing together the power of Kinect for Xbox 360 and the intelligence of Bing, we are transforming how people enjoy entertainment.”
Announcement E3 Kinect Xbox 360