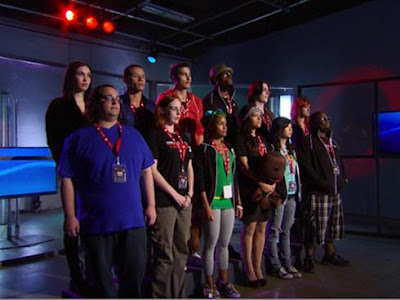 PlayStation Network's reality series The Tester has officially kicked off its Season 3, giving twelve lucky gamers the opportunity to become a Production Associate at the world-famous SCE Santa Monica Studio. It's sink-or-swim as each contestant competes in a series of grueling physical and mental challenges to further their hopes for working at the studio known for creating the God of War series.


The new season is the biggest yet, with larger prizes to be won and an impressive line-up of guest panelists who will judge the competitions. In addition to the role at SCE's Santa Monica Studio, the winner will also receive a $5,000 signing bonus, a 55" 3D Bravia TV, a PlayStation 3, and a 2012 Ford Focus Titanium. Guest panelists include David Jaffe (Twisted Metal), Dylan Jobe (Starhawk), Todd Papy (God of War III), and Nolan North (voice of Nathan Drake).

With the first two episodes already out, I thought I'd take a moment to give my impressions.

For starters, it's great to see Meredith Molinari return as the host, as she did such a great job for the first two seasons. Also welcome returns are panelists Brent Gocke, release manager for Sony first-party Quality Assurance, and Adrianne Curry, winner of the first season of America’s Next Top Model and known to be a serious gamer.

On to the contestants...

burnNibelheim -- this Nevada-born contestant possesses a lot of gaming knowledge and managerial skills which has helped her succeed as a game store manager. She's feisty and determined to win, while not afraid to stand up for herself as a team leader. It'll be interesting to see how her feud with Sukaiden develops over the season.

akilleezmight -- this Brooklyn-born is one of the oldest contestants this season, and his experience shows. He speaks with calm and collected voice which matches his disciplined military background quite nicely. Seems like one to watch out for.

krystipryde -- this opinionated Ft. Lauderdale-born contest stands out with her long jet-black hair and tattooed body. Often heard cussing (with the appropriate beeps), she can be both scathing and sarcastic. Her background consists of fire-breathing, contorting as a carny and gun shooting as a child.

ninjanomyx -- born in Bronx, this rough environment seems to have toughened him up and given him an outspoken personality. Always talking in strange rhymes, it's sometimes hard to make sense of what this jolly gamer saying. What is clear is that he has a thing for the host, Meredith Molinari, and stereotypes all the girls on the show.

Ashichan -- a Northern California cosplayer with a strong connection to the Earth, this bubbly and courageous contestant is not afraid to show off her 70's fashion sense or volunteer herself first for challenges. It's too bad the impression she leaves is a little underwhelming.

J-Tight -- this California-born hardcore gamer claims to spend close to 100 hours a week gaming, his favourite being 3D games and PlayStation Move (note: Is he serious? 100 hours a week would literally be every waking hour). He's certainly a favourite among the group and if Episode 2 is any indication, he'll be picked early on for group challenges. Another one to watch out for.

Kwajamonster -- this Columbia-born contestant seems to have gotten the most face-time thus far and for good reason, her comments are often off-the-wall. Dropping S-bombs one minute and speaking way too much about silent farts the next, you can expect the unexpected with her. Her sniping skills are second-to-none, and while she faltered during the interview period, I think she'll be around for awhile.

Skyd1ddy -- this smooth-talking, Fontana-born contestant has a distinct look with his thick-rimmed glasses and always sporting a fashionable hat. He often talks with imaginative references and with a lot of enthusiasm, e.g. "will they go in my brain? will they lay eggs in my brain? will they create a whole new planet in my head!"

Asuukaa -- this Milwaukee-born contestant isn't your typical girly-girl, with a self-professed dislike for pink and love for women's roller derby. Her PlayStation gaming experience speaks for itself with 29 Platinum trophies (note: that's impressive), and with parents who are police officers she certainly doesn't seem to take flack from anyone.

egoraptor -- this West Palm Beach-born contestant is the only one to be voted into the competition through an online voting competition held by Sony. Naturally the fan favourite, he's got a lot to prove after telling the panelists he's partially there for the fame and notoriety. With a sizable YouTube following, he's got the biggest target on his back and the most to prove.

Suzkaiden -- born and raised in the Dominican Republic, this contestant is easily the most loathed in the house. She's got a big mouth and a confrontational personality which seems to rub everybody the wrong way. Her behaviour is a big erratic too, as she can be seen bouncing on the bunkbeds and generally assuming she owns the place. Also, what's with the carrying around of a lifesize Sackboy doll? Definitely a contestant with a target on her back.

RealityPalez -- this Chicago-born contestant has the ego of a sports star and isn't afraid to gloat about his victories. Fortunately for him, there's the competency to back it up. When he's not impressing the judges with his incredible PlayStation knowledge, he's winning challenges and letting the world know just how proud he is of the accomplishments.

Well, there you have it. Your twelve PlayStation The Tester contestants. If you've been watching the show, who's your favourite and why?