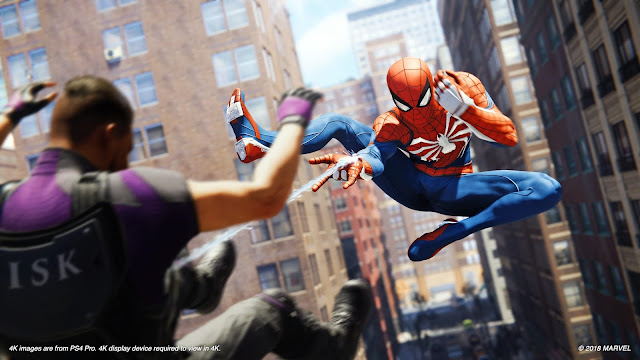 Sony's had an absolutely phenomenal 2018 so far, but could it actually become greater? The answer, after putting more than 20 hours into Marvel's Spider-Man, is an emphatic yes.

During my review time with Spider-Man, I kept on imagining how much pressure Insomniac Games must have felt creating an original story in this beloved universe. Spider-Man has millions of passionate fans all over the world, and is consistently the highest grossing superhero franchise every year. Satisfying that massive fan base would require one hell of an effort, I imagine. Fortunately for Spidey fans, Insomniac Games nailed it on multiple fronts. Let's first take a closer look at these high points, shall we? 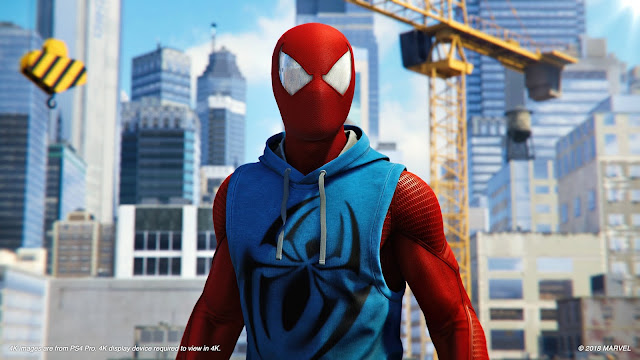 
Spider-Man scores big where it matters most: the game's story. Simply put, it's amazing, it's spectacular, it's (insert any and all Spider-Man adjectives here)

So much care has been taken to ensure Spider-Man, his supervillains, and his close family and friends are represented with extreme accuracy. The hot and cold relationship between Parker and MJ, the evil genius of Otto Octavius, and the secretive, scheming Norman Osborn are just a handful of highlights permeating this story. I'm itching to get into much greater detail, but doing so would jump too far into spoiler territory.

One thing I can say is how phenomenal the story presentation is. Rhino, Shocker, Mr. Negative, Scorpion, Electro, and the rest of the villainous crew all look stunning in action. Same goes for Spidey's family and friends, from Aunt May to Miles Morales, the characters models, animations, and voice acting is all spot on. It doesn't quite match God of War's high benchmark, but it's pretty damn close. 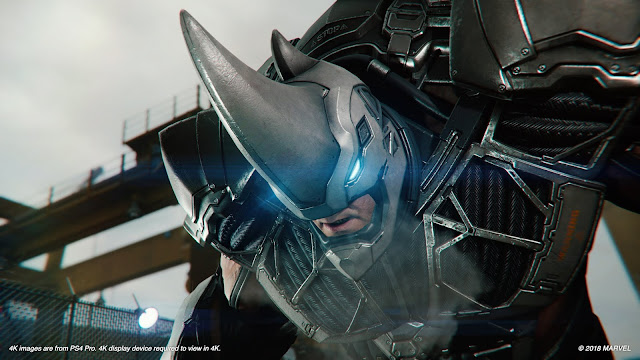 
I never thought I'd say this but I can't get enough of Spider-Man's phone. While swinging through the concrete playground of New York, Spidey often receives incoming messages, both phone calls and text messages. Your most frequent caller is Yuriko Watanabe, a member of the NYPD who aids Spider-Man despite it breaking police rules for her to do so. While the majority of calls between Spidey and Yuri are all business, from time to time they turn awkwardly flirtatious, and these moments are super funny.

Spider-Man also has an unhealthy obsession with J. Jonah Jameson's radio show, which he listens to while flying around New York. After nearly every good deed you do in the game, Jameson goes on air to decree the "Spider menace" is once again harming the city. He'll twist Spidey's heroic moments into something sinister, in attempt to turn New Yorkers against him. Of course, it never works, as all on air callers Jameson interviews wind up saying Spider-Man actually saved them. There are dozens of these radio shows snippets over the course of the game, and they are, by far, the game's best comic relief. 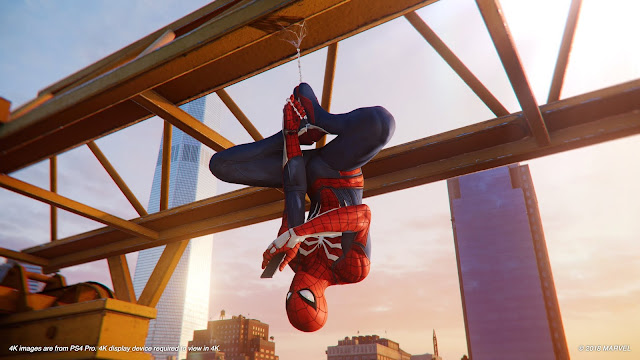 
Like the Batman Arkham series, Spider-Man has fluid, freeflow combat. Nearly every move can be strung together, giving you the freedom to mix and match attacks however you see fit. Initially, you'll have a modest set of melee strikes and web attacks at your disposal. Over time, as you rise in level (up to 50), you'll unlock new moves in three skill trees: Innovator, Defender, and Webslinger.

As your moveset grows, so too does your tactical options in battles. Discovering new ways to string attacks together is part of the fun, whether that's swing kicking enemies into the air then air yanking them back down, or doing a leap kick off an enemy then rebounding with an off the wall attack. The possibilities are seemingly endless, making combat situations dynamic and fresh provided you're willing to experiment. Best of all, the extreme finesse and fluidity of your strikes really capture the essence of being Spider-Man. 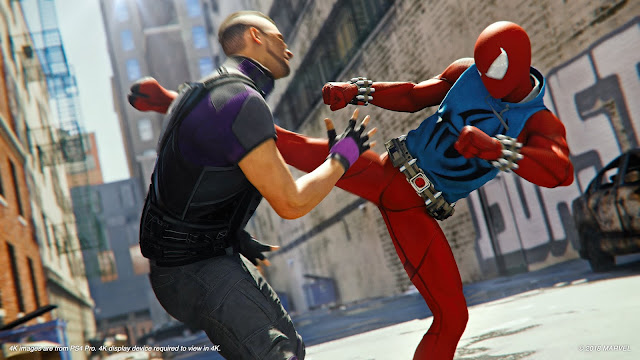 
Spider-Man features 25+ different suits, majority of which come straight from the comics. You've got the Classic Suit, Iron Spider, Spider Armor, Negative Suit, Spider-Punk, and a whole bunch of other suits both recognizable and rare. There's even a Vintage Comic Book Suit that gives Spider-Man a distinct cartoony, hand-drawn appearance. Suits not only give Spider-Man a new appearance, but also unlock suit powers he can equip.

What's really neat is whatever suit you're wearing will be reflected in the cutscenes. All cinematics are done in-engine, so if you want to play the majority of the game in Spider-Man's lucha Wrestling Suit, you can. This really adds a personal and unique vibe to every adventure, and I'm already looking forward to New Game+ replays using different suits.

As well, over the course of the game you'll unlock 8 specialized Spider-Man gadgets. These range from his signature Web Shooters, to deployable to Spider Drones, to his enemy-gunking Web Bombs. Factoring these gadgets into your already vast offensive arsenal makes for some wild possibilities with flashy and effective results.

For instance, you can stun multiple enemies with your Electric Web, then unleash a sonic wave Concussive Blast to send them hurling off a rooftop. Alternatively, deploying a Suspension Matrix freezes enemies in the air, leaving them vulnerable to devastating air combos. In order to facilitate all this on-the-fly gadget swapping, gameplay halts to a crawl while accessing your gadget menu. When you combine Spider-Man's melee and web upgrade trees, suit powers, and gadgets, it's mind-boggling how many ways there are to upgrade and customize your character. 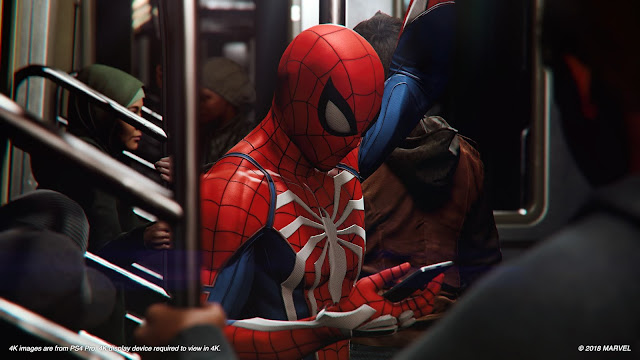 
While the main story earns an A+ grade from me, the open world sub-quests and challenges are far less interesting. They mainly consist of run-of-the-mill tasks we've seen time and again, like collecting objects, completing speed challenges, and dismantling enemy hideouts. These routine tasks are essentially mandatory, too, since completing them awards you with tokens used to upgrade your gadgets and suits.

Overall, it would have been nice to see greater integration of these challenges into the main story. Soaring through the air catching pigeons for an old friend (yes, really) or taking smog samples to help Harry Osborn determine the cause of pollution are both noble causes, yet add virtually nothing to the game's narrative. Same goes for the frequent Spectrograph and Circuit Projects, two mini-games designed to make you believe Parker is a genius scientist but end up feeling like a modern day version of Pipe Mania. They're simply there to keep you busy and add more hours onto the total time played clock.

There are exceptions though, specifically the Taskmaster Challenges and Black Cat Stakeouts. Both of these side missions introduce new characters into the mix, and they're fascinating to undertake. Sony just announced Spider-Man will be getting a Black Cat story DLC mission, so I'm looking forward to exploring her storyline even further. 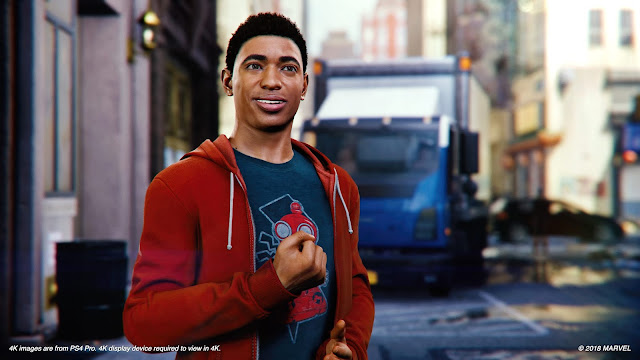 
Incredibly, Spider-Man has lived up to the hype. It's easily the best Spider-Man game ever made story-wise, and it has great sequel potential should Sony decide to revisit this universe.

I also thoroughly enjoyed the freeflow combat, and in particular the excellent pacing for skill and gadget acquisition. You start off with basic skills and gadgets, but soon enough you'll be stringing together multiple moves just like you see in the movies and comics. You really do feel like Spider-Man, Insomniac Game's obvious goal here. It's just too bad the open world sub-quests mainly feel like busywork more than anything else. Had they been more engaging, I could have easily given this game a perfect score.

Still, Spider-Man is a truly an epic adventure—must play no doubt—and that's the bottom line because Stone Cold Hunter says so.