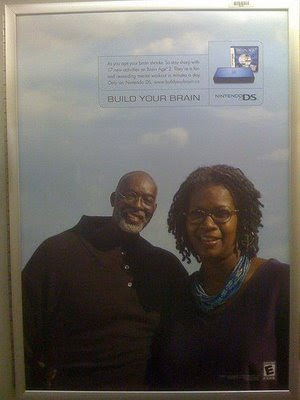 Every man has a list of health problems they hope don't happen to them during their lifetime. Male-pattern baldness, myopia and impotence come to mind. Well, after seeing Nintendo's new 'Build Your Brain' ad campaign I am officially adding shrunken head syndrome to my list.

The ad on the right is one of many that have been appearing around Toronto in the past two weeks. Each ad contains two people (generally 40-something couples), with one person having an abnormally tiny head. Yes folks, this is what happens if you don't have your daily dose of Brain Age.

"As you age your brain shrinks. So stay sharp with 17 new activities on Brain Age 2. They're a fun and rewarding mental workout in minutes a day. Only on Nintendo DS. www.buildyourbrain.ca"

Just look at that poor, poor fellow. His wife really needs to buy him a DS - and soon.

Coincidently, Gamasutra ran a story back on Thursday featuring a new UK-based study that seems to back-up Nintendo's "brain boosting" claims. A nine week test showed that using Brain Age improved the math score of grade schoolers by 50%. I'll be honest, I've been skeptical of Brain Age's effects since the game came out two years ago, but this new study is very impressive.

In case you're interested, the Build Your Brain campaign links back to Nintendo of Canada's Pick Up And Play website that was launched this summer. Yes, this is the same website that encouraged us back in July to grab our loved ones for a romantic dinner and Wii date.