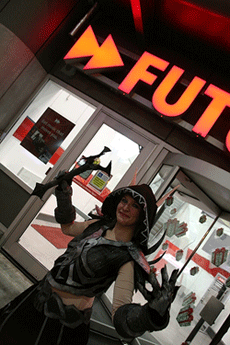 Every year around this time we as gamers always say silently to ourselves why do all these amazing games release so close together? And let's be honest, the problem is only getting worse with each passing year.

Let's see, we've had Fable II, LittleBigPlanet, Rockband 2, Gears of War 2, Fallout 3, and the list goes on. But there's one game out there that may eclipse them all - and that of course is World of Warcraft: Wrath of the Lich King.

The WoW expansion pack released at 11:59 p.m. yesterday at Future Shop locations across the country, and NextGen Player has once again been given exclusive access to launch party photos at the Yonge & Dundas location in downtown Toronto.

According to Elliott Chun, one of the WOTLK event organizers, "more than 200 gaming enthusiasts turned up at this location – some as early as 11:30 a.m. yesterday – to purchase the game."

As part of the festivities, the Future Shop location held a World of Warcraft cosplay contest at 11:30 p.m. where the best dressed Azerothian received a $100 gift card from Future Shop and was moved up to the first spot in line.

NextGen Player guest writer and WoW enthusiast Nymity was on hand at the event and said the atmosphere was amazing.

To give a small taste of the event, here are some photos courtesy of our friends at Future Shop: [Thanks to Future Shop for sharing the photographs!]
Launch MMO PC Photos Promotion