on April 15, 2009
We here at NextGen Player pride ourselves in being able to provide our valued readers with gaming related news and information that is insightful and useful. Here we aim to please yet again. Many gamers out there (much like ourselves) yearn to possess a gaming setup that provides the ultimate video and audio experience.

That said, NextGen Player presents to you our take on the 'ultimate' gaming setup all for the cost of approx. $2,000 CAN (pricing accurate as of the date of this post). That's what you'd likely dish out for a half decent 46" to 50" flatscreen television. 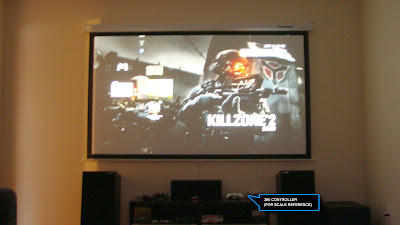 I get a lot of questions regarding my home theatre setup, which I primarily use for gaming. I also receive snide comments from others about being made of money, which can be kind of annoying. So in an effort to answer these questions, dispel the myth that I’m living off a trust fund, and provide a copy-and-paste link to send to my friends, I submit to you my how to build your own 92” screen with 7.1 surround sound setup for around $2000.

The heart of any decent setup is the Receiver. It functions as your media switcher, and it simplifies your output to your display. I heartily recommend the Sony STRDG720. It’s a full 7.1 receiver and it’s fully compatible with your PS3. It has 3 HDMI inputs, and can do full uncompressed audio over the HDMI source, meaning you can hear the original mix of your BD titles with no compression. When in 5.1 mode, such as when you’re playing Xbox 360, it will split the rear signals and distribute them to the extra speakers if you have them available. I even have my Dreamcast hooked up to it using the VGA adapter and VGA -> component video converter. If only the receiver had a VGA in...not many do as I have found.


Another subtle but HUGE advantage of doing the receiver --> projector route - screen lag in music games like RockBand you can sometimes experience on an HDTV are virtually eliminated. Meaning your timing on the drums will be much more accurate and your singing won’t be an echo of what’s playing on the screen.

And yes, I still rock a Dreamcast. It’s on the dead format shelf next to my Xbox 360 HD-DVD player.

Oh and BTW, don’t spend money on shielded HDMI cables. HDMI is digital, meaning on or off. Cheap cables will do fine so long as they’re category 1.3. You can get them from Monoprice.com or Canada Computers.

Now, on to the display. I spent a long time shopping around for the right HD projector and there are a couple that have risen to the top in terms of performance and price. Before I begin, there are 2 types of projectors, LCD and DLP. LCD projectors surfaced after DLP and have caught up to being as good as DLP projectors, but tend to be a little more expensive. The two projectors that own this segment of the market are the Panasonic PT-AX200U and the Optoma HD65/HD640.

I use the Optoma HD65/HD640 DLP Projector (different names for the same projector, but the HD640 is sold exclusively at Cosco, so far as I can tell, whereas you can find the HD65 at various computer retailers and big box stores). The Optoma is considered a native 720p projector, but it’s Texas Instruments DLP processor will display 1080p/60hz just fine and is capable of running 1080p at 24hz for Blu-Ray movies. BD titles prefer to run at 24hz to match the movie’s original frame rate. For games, most run at 720p anyways, and the PS3 switches video modes on the fly so there won’t be any need to fiddle with the input on the projector, ever. The Xbox 360 is a slightly different story as its hardware scales whatever it is displaying to match the resolution your display is set to. I leave my Xbox 360 on 720p and occasionally switch it to 1080p for my limited library of HD-DVDs. A nice thing about the HD65/640 is that it’s tiny. Weighing in at only 4lbs (less than half the weight of the Panasonic) you can ceiling mount it without having to reinforce your ceiling with 2x4s or plywood. I just use drywall anchors that came with my ceiling mount.

Part 2 of James' article can be read here.


NextGen Player How To Tech and Spec