on April 19, 2009
Earlier this week, NextGen Player's contributing writer James McIntosh shared part one of valuable information on how to build the ultimate gaming setup on a limited budget of $2,000. Here is the rest of the article...enjoy.

The Panasonic PT-AX200U is also a mighty fine projector that does everything the Optoma does, PLUS it’s about 20% brighter and has a slightly better contrast ratio (6000:1 vs. 4000:1 for the Optoma). It also has 2 HDMI inputs vs. 1 and has a “Game Mode” that is apparently more responsive for fast action.

I’ve seen both in action and both offer sharp, bright, beautiful images. The reason I went with the Optoma was a simple one - price. In the US either projector can be had for around $1000 USD or less via online stores like ProjectorPeople.com, but in Canada the story is slightly different. The Panasonic Canadian MSRP is $2200, and the cheapest I’ve been able to find one is for around $1800, and since our dollar went down it’s not really cost effective to be purchasing from an American web site. When I initially put my setup together, the Panasonic was $1300 USD at it’s lowest, at the same time, every Cosco in the GTA was selling the Optoma HD640 WITH an 92” panovision screen for $950 CDN. Simple decision here. 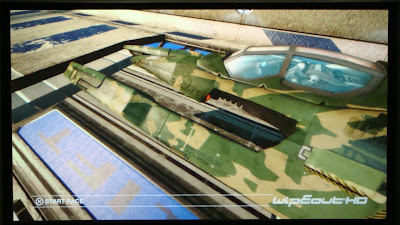 If you are reading this from the states however, you might want to consider the Panasonic as it’s much easier to get. As I write this, post economic meltdown, there has been some changes due to the lower value of the Canadian dollar - the current price of the HD640 with screen bundle at Cosco is around $1099 CDN. 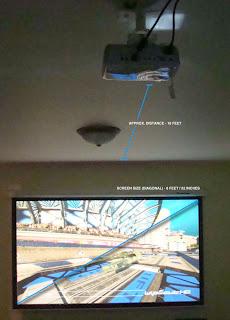 A short word on screens - they’re great and offer a nice reflective matte surface to display your games, but you can also sell the thing on eBay and just project on your wall. Pick a colour like Behr Silverscreen in an eggshell, or spring for a couple gallons of Screengoo (google it) for a better surface. The nice thing if you ditch the screen is you can go as big as your room will allow. But you should budget at least a 10 foot distance from the viewing area to wherever you mount your projector to get a decent sized image. The more room you have the bigger your screen can be. If I were to move my projector back around 2 feet, I could pick up another 25-30 inches or so, bringing it up from an obnoxious 8 feet to an even-more-obnoxious 10 feet. When you’re measuring your screen in feet vs. inches, life is just automatically better.

Lastly, your speakers. Where are we now, $1100 for the projector plus $350 for the receiver thus leaving you about $650 for speakers and cables? This is where you might have to get creative as a decent set of speakers can run hundreds, if not into the thousands. I stole my Dad’s old StudioLab surround setup, added two more old speakers from a home-theatre-in-a-box I bought at a liquidation sale, and then added a brand-new 10” Klipsch powered subwoofer for $300 (you need a powered Sub with these types of receivers, as they usually don’t power a sub like smaller home-theatre-in-a-box setups, but instead a monaural output for an RCA to run to a powered box).

Unless you have a Dad who’s too lazy to ever use his speakers again after moving, you’re going to have to shell out for some of your own. What you want to do is find a decent pair of front uprights, a decent center and an average-to-decent powered sub. If you have really good fronts you can even skip the woofer, and the 4 rears can be slapped together with whatever you can find, you can use smaller speakers and upgrade them later and still have your complete 7-channel sound-field, which is absolutely essential for playing Dead Space in your dark home theatre. For the sake of completing the article I’ll spec out the JBL SC500.5 surround setup. It’s a decent sounding setup for a room that isn’t too big, and the speakers are small and won’t intrude on your décor, while you save up for a nice set of PSBs or Infinity loudspeakers. Small speakers have come a long way but nothing sounds quite like big speakers that can move a lot more air.


NextGen Player How To Tech and Spec