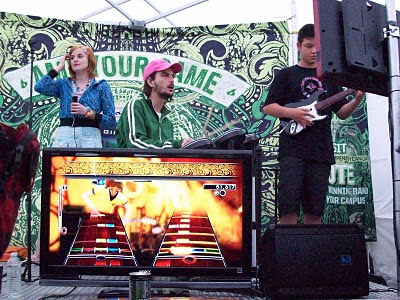 Video games have long been given a bad rap by the general media which has a tendency to cite, in a rather sensationalized fashion, the supposed negative impact they have on society, and on children and adolescents in particular.  Many of the opponents of video games make claims that video games are linked to a growth in youth violence -- especially school violence -- and that prolonged use of video games not only leads to a decrease in social competency but also lowers creativity.

While the research on video games is not conclusive, an increasing number of scientific studies are finding that the alleged correlations may simply be untrue. In a study published in the June 2010 edition of the Review of General Psychology, Dr. Ferguson conducted an in-depth analysis of the existing research on the impact of violent computer and video games on aggressive behaviour.  The study, entitled “Blazing Angels or Resident Evil? Can Violent Video Games be a Force for Good?” (note: it's a PDF file), found that current research is marred by "poor methodologies and the intrusion of ideology and scientic dogma" and there is little reason to speculate that "violent video games are a significant factor in promoting youth violence."  Dr. Ferguson further states that the myopic view on the negative effects of video games is prohibiting a broader discussion in the scientific community about the risks of violent video games on behaviour.

It's true for decades now that video games have been a medium attracting vocal activists who protest the supposed ills of the form of entertainment.  Globally, the most notable anti-video game activist is Jack Thompson, an attorney in Florida who was disbarred in 2008 after more than ten years of litigation against video game publishers such as Take Two Interactive, Sony Computer Entertainment America, and Take Two's subsidiary Rockstar Games.

Mr. Thompson's high profile crusades against the video game industry has been well documented on major games news sites who have criticized him for perpetuating stereotypes and misconceptions about the video game industry.  Famous comedians Penn & Teller attempted to debunk Thompson's theories on their popular documentary television series "Bullsh*t" by tackling the issue of violent video game and the people who love to hate them.  While the show can't be taken as any sort of a reasoned argument, it does reflect the sentiment of an industry frustrated at the ideological-based arguments for the limiting or banning of violent video games.

While activists may claim a link between violent video games and increased youth violence, Dr. Ferguson's research found that in the last decade violent crime has plummeted at the same time as video games have increased in popularity.  Like the hypothesized correlation of TV watching and violence 20 years ago, Dr. Ferguson describes the link between video games and violence as "illusory" and notes that the explosion of video game consumption has not sparked an epidemic of youth violence.

These findings are consistent with other recent research that demonstrates a tenuous relationship between the consumption of violent video games and real world aggression.

Also, I encourage you to watch my interview with the authors of Grand Theft Childhood, Dr. Lawrence Kutner and Dr. Cheryl Olson, where we have a revealing conversation about whether exposure to violent video games can result in increased levels of aggression in youth.
Research