Nintendo of Canada's Moving In 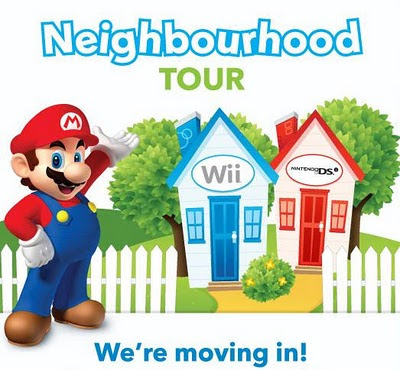 Nintendo of Canada is taking their hit games and going on tour across Canada, visiting select Real Canadian Superstore and Maxi & Cie stores. Dubbed the "Neighbourhood Tour", the store displays will let you take a stroll down Wii Street, Nintendo DSi Drive, or spend some time in the activity gazebo with Crayola and Kodak.


In the gazebo there will be colouring sheets of your favourite Nintendo characters (like perhaps some Pokémon) and you can snap a photo with Mario.

Visitors to the attraction can learn more about Club Nintendo and connectivity on Wii and Nintendo DSi systems.

The full list of tour locations can be found here.

If anyone attends and gets their picture taken with Mario I am willing to post it on NextGen Player, provided they aren't obscene. Which really they shouldn't be, it is Mario we're talking about. Send your pics to inquiries@nextgenplayer.com.
Gaming Tour Nintendo DSi Promotion Wii